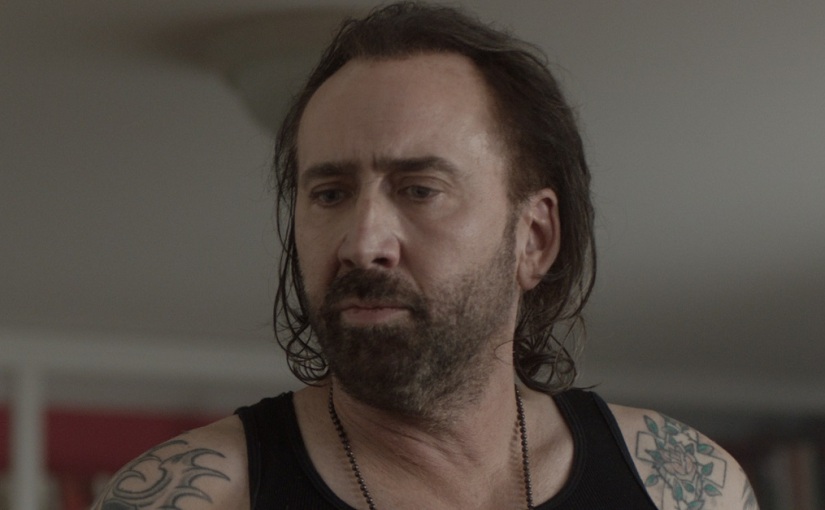 This was a busy year for Nicolas Cage. He was in 8 movies, including smaller voice-acting parts in two animated movies (Spiderverse and Teen Titans). I didn’t see either of them, but Josh says he’s funny in Spiderverse.  We’re only including movies that he starred in.

The Cage movie everyone was talking about this year was Mandy. To be frank, as longtime Cage diehards who have eagerly watched every damn direct-to-video crime movie he’s ever done, our feeling is that Mandy is for posers. The key to the latter-day Nicolas Cage movie is that it’s just a regular movie that Cage took in some extraordinary direction. Cage is most often at his best when he’s out of proportion with everything else. Mandy is too self-consciously a Nicolas Cage movie, and it teeters on the brink of self-parody. If Cage made two other movies like Mandy, it would be time to declare him on the decline. Thank god, he did not. He made three movies that were considerably better and a couple others that were trash (which we are fine with: it can’t all be fine dining, and wading through trash makes it all the more gratifying when he hits one out of the park).

Without further ado, our ranking of the six movies that Cage starred in this year:

Tim Hunter! You’d probably know him from River’s Edge, but he also directed episodes of many popular TV shows (Twin Peaks, Breaking Bad, Riverdale, and lots of others). Looking Glass is pure sleaze and we love it. It opens with credits in David Lynch font and some ominous driving. We soon learn that married couple Nicolas Cage and Robin Tunney are struggling after losing their only daughter and have purchased a scuzzy motel off Craigslist in hopes of starting a new life. The hook is: Cage finds a secret passageway to a two-way mirror where he can spy on guests! It’s a bit like Bad Times at the El Royale, but good. His performance is brilliant throughout, and he’s doing something that he’s never done before. It’s a relatively understated performance, without a lot of screaming and shouting, but it is totally batshit. Three things especially stand out. First: for most of the movie, whenever he’s not looking through the spy mirror, he’s thinking about looking through the spy mirror. The distracting obsession is all over his face. Second: his reactions! There are dozens of meme-worthy reactions in this movie. Certainly all the scenes where he’s perving out at the spy mirror are pure gold, but his reaction to his own messed up dream is priceless. Third: the sex scenes with Robin Tunney are magnificent.

If it were just me writing this, I probably would have put this first, but Josh feels strongly about Looking Glass and he makes a strong enough case that I decided to concede this one. Looking Glass has Cage doing something we’ve never seen him do before, whereas this is another in a long line of balls-to-the-wall Cage explosions. But what an explosion it is. I mean look: he’s wearing a shark tooth necklace. It’s hard to describe this, but basically: Cage is a truck driver who has lost his wife and daughter. He meets a woman with psychic powers (Franka Potente, from Run Lola Run) who wants him to help guide her comatose daughter’s soul back to her body, but Cage’s wife’s soul ends up possessing the daughter. It’s completely insane throughout, with Cage leaning into the white trash angle. There’s lots of weird sex shit and the movie savors every morsel of luridness. Director Maria Pulera is someone to watch.

We love Brian Taylor and this movie is a ton of fun. It’s a fairly straightforward extrapolation of an excellent premise: parents everywhere are overtaken with an uncontrollable urge to murder their children. Cage here is very clearly paying homage to Jack Nicholson. It’s a blast, even if his performance is predictable. Mom and Dad loses some Cage factor points because Selma Blair soundly upstages him. 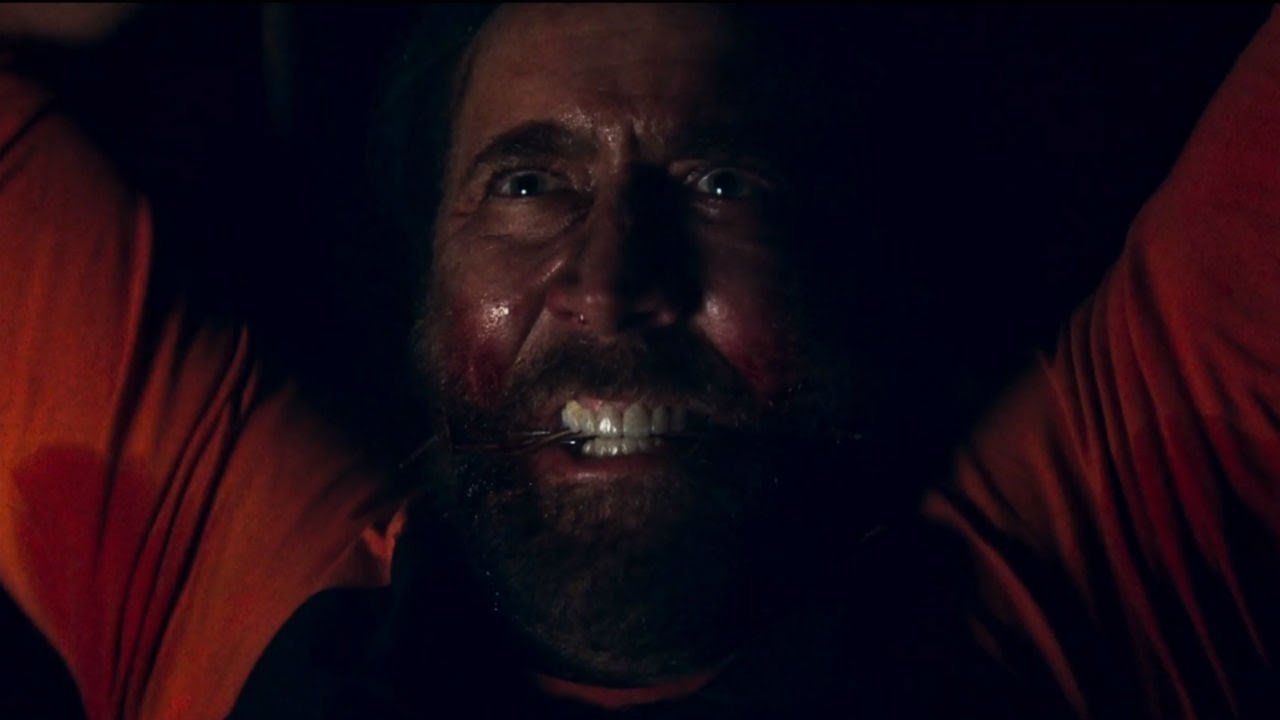 Ah, Mandy. Look, we wanted to love this. We thought we would love this. But we just didn’t. It’s a glorified music video, remixing tropes that have been done so much better before (you want a scary satanic sex cult? Let me direct you to Sergio Martino’s All the Colors of the Dark, which eats Mandy for breakfast). The storytelling is inept in a bad way (it’s too pretentious to enjoy its ineptness as such). The part that irked me the most was when he sets out to track down the cult, with only one lead about where they might be, and we cut *immediately* to him having them in his crosshairs. I mean c’mon, how can there be tension when you don’t even try? Also, to borrow an observation from Brazilian critic Filipe Furtado, it takes a special kind of mediocrity to render a meeting between Nicolas Cage and Bill Duke underwhelming. And yet that’s what Cosmatos has done here. We don’t hate Mandy, though, we just think it’s overrated and for posers. We have to admit that it has two scenes that immediately join the Cage pantheon: vodka-chugging and axe-forging. 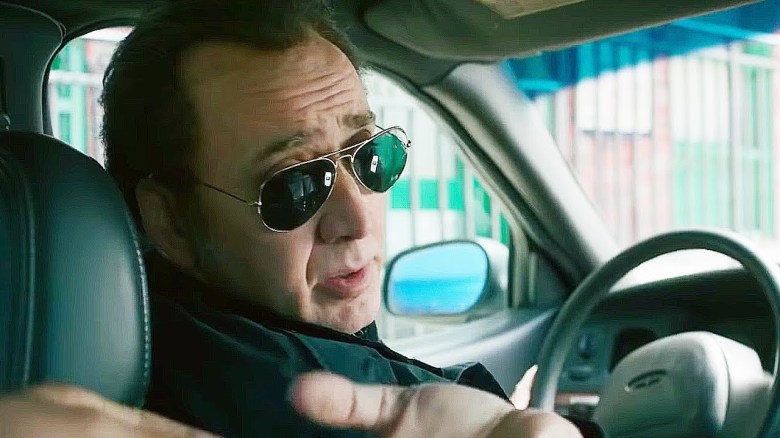 This is deep in the bottom of the bargain bin. It does, however, work on the good-bad level. What makes it fun is that the bank robbers are total psychopaths who kill people indiscriminately rather than professionals who only resort to violence if they have to. Cage loses it only once, but there are lots of fun shots of him casually shooting a pistol in the general direction of a building full of hostages. One of the main arcs in this is “bullied black teenager learns that white cops are his friends,” and so A+ for “Not ALL white cops. Not Nic Cage, for instance.”

Alas, this one has basically no redeeming value. It starts off with a promising setup: it’s the near future, and climate change, etc.. has messed everything up real bad so that there’s not enough to go around in the US anymore. There’s a dystopian state with a policy of deporting anyone who produces less than they consume to the euphemistically-named “New Eden.” The Humanity Bureau is like the new I.C.E., but now they’re scooping up derelict Trump supporters (yes, Trump is explicitly referenced). Anyways, it quickly loses any semblance of interest and becomes a tedious slog. No Cage factor to speak of.