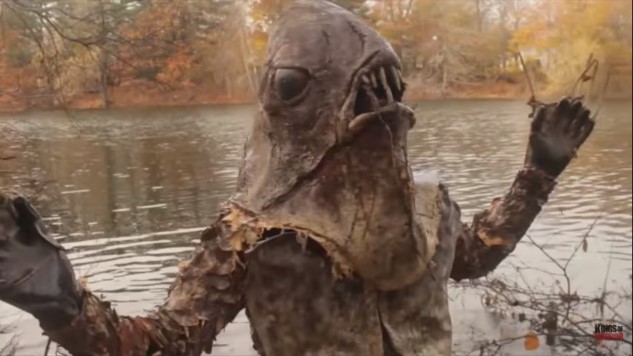 Permissions roll over tomorrow, so I may have to update this if something changes, but I decided to post it today because if there’s something you really want to see, you’ll at least have definite access tonight. I looked at lists of what’s due to come and go tomorrow and I don’t think it will change anything, but I will double check for surprises.

To quote Ethan Vestby, “The United States of America may be a rotting corpse, but this represents it at its best.” Don’t Let the Riverbeast Get You is a microbudget feature about a New England town with a Riverbeast problem. It’s not going to work for everyone; the production quality is very low and there are some problems with the sound design. But for those of us who are comfortable with bargain basement quality, this is an absolute delight. I could watch it every day. It gets funnier every time. The key is that everyone plays it straight. It does not make fun of itself or exaggerate its cheapness or wink at the audience. There are no shock tactics or gross out jokes. It’s actually quite wholesome. The humor is in the exceptionally clever writing and committed delivery. NB, this is the very tip of the Motern Media iceberg. It is a vast and strange universe once you start digging.

2020 has not been great for new releases. This is one of the only American films I’ve loved this year. It’s an ugly movie and it reeks of death. Tom Hardy, playing Capone at the end of his life with dementia, continues his run as the most interesting actor of his generation. El-P’s score is nightmare fuel.

Eccentric Gary Sherman thriller where a bored teenage girl calls the adult party line and ends up in a phone flirtation with an honest to goodness serial killer. This is not an original observation, but it’s like Harriet the Spy vs. American Psycho.

In honor of the totally unwelcome remake, I’m recommending the original. This was the movie that launched Nicolas Cage’s career. He plays a rough Hollywood Romeo to a privileged San Fernando Juliet and it’s utterly delightful.

One of Nicholas Ray’s peak masterpieces and something everyone should see. It’s about as good as movies get. Bogart sparks a hopeful romance with Gloria Grahame but his inner darkness immediately threatens it. The companion piece to this is Ray’s On Dangerous Ground, which is comparably great and available as a paid rental on various services.

One of the greatest Hollywood melodramas and also one of the greatest movies about American class immobility. It’s in some respects the polar opposite of Sirk’s great melodramas, replacing color hysterics with straight-faced B&W, but it’s in the same echelon of achievement. Montgomery Clift is exquisite. Compare his performance in Wyler’s The Heiress (1949).

Amazon has a particularly good selection of direct-to-video (DTV) genre movies. DTV is not for everyone (I expect that people who mostly watch high-budget contemporary releases or who have highfalutin taste are less likely to enjoy it). In any case, I am very deeply into this category right now and here are some treasures I’ve found:

For connoisseurs of insane DTV sci-fi premises, this is a fine wine indeed. I couldn’t begin to explain it, but kickboxing champ-turned-actor Olivier Gruner gains atavistic superpowers after a shady tech corporation tries to murder him.

Batshit DTV fantasy-horror with Dolph Lundgren as a member of the Knights Templar who comes to NYC to combat Satan’s minion.

One of my favorite Dolph Lundgren movies, directed by Russell Mulcahy (Highlander, Razorback). The half-finished skyscraper setting is like an Expressionist nightmare and Mulcahy never runs out of inventive ways to exploit it. The combination of minimalist narrative and elaborate two timeline cross-cutting gives this a dreamy, abstract vibe. This is definitely for a very specific niche: people with an arthouse sensibility who like DTV action. But if (like me) you’re in that niche, *chef’s kiss*.

This is a tightly constructed, very enjoyable DTV bordersploitation Scott Adkins action vehicle with characteristically fluid direction from Florentine. It’s the sort of movie that starts out with title cards explaining the meanings of ‘samurai’ and ‘ronin’.

Not for everyone, BUT if you love Jean-Claude Van Damme, you should give this a look. It’s one of his better latter day efforts. He’s a bodyguard with PTSD and he has a romantic subplot with Vivica A. Fox.

I actually really like retired pro wrestler Stone Cold Steve Austin as an actor, and this is one of his best roles. He plays a vigilante on a rampage. It begins in medias res as Austin rolls in with incredible angry momentum. His physical acting is very impressive. Danny Trejo is the lead biker villain.

This is an immersive military procedural along the lines of 13 Hours, but it sets itself apart with its vivid sense of the rhythms of life at the outpost of doom. It’s no American Sniper, but it is comparable in the way that it burrows into the mindset of a deployed soldier. It’s not sanitized; it’s full of brash homophobia and it presents its ample violence in the desensitized way the characters experience it. These elements are probably going to turn off some viewers, but it’s important to recognize that while the movie does have an overarching reverential stance towards the military, it’s not uncritical of its particular subjects. The action climax is jaw-dropping.

Throwing this out there as a holiday family viewing option. I’m sure a lot of people have seen it, but it does seem underappreciated. It’s upper-tier Spielberg and it combines superior craft with a pop Saturday matinee sensibility.

I’ve avoided recommending this for *years* because I thought the cut on Netfix was edited, but it turns out there is no edited cut. Eli Roth just labeled the blu-ray release as a director’s cut to highlight that it reflects his uncompromised vision. It’s the same as the version on Netflix.

This is an audacious pastiche of the much maligned Italian Cannibal cycle and an absolutely vicious satire of bourgeois progressive activism. It’s one of the only horror movies in recent memory that effectively combines extreme content and a high level of artistry. Definitely top ten horror of the 10’s for me and a breath of fresh air amidst all the defanged hipster shit.

Not for everyone, but you know who you are. It stays close to the formula; it’s modern in its outlook without pandering; the characters are vivid and it’s easy to believe they’re friends. It mostly goes for the obvious jokes, but it executes them effectively. I’d say it’s a notch below Blockers and three notches above Booksmart.

You don’t hear me getting excited about a lot of contemporary American indie dramas, but I am a total stan for Eliza Hittman. Her Never Rarely Sometimes Always is my favorite American film this year, and I also highly recommend this 2017 effort. It’s in her trademark edgy, fleshy, impressionistic style, but unlike her other features it follows a male protagonist. He’s a good-looking young guy in Brighton Beach who hangs out with a crew of homophobic tough guys while secretly hooking up with older men he meets online. It has the same sort of crescendo of anxiety that I find so compelling in Never Rarely Sometimes Always. Both resemble a gentler, more delicate Uncut Gems (other obvious points of comparison are Claire Denis and Catherine Breillat). NB, I think this is more thematically interesting than many critics give it credit for. It gets at something deep about the opacity between our public and private selves.

This is probably the third or fourth time I’ve recommended this but to reiterate, this is one of the best modern chanbara and an immensely satisfying action picture. It has just a little of Miike’s perversion– enough to give it a Miike vibe, but not so much that it should deter most people. It’s about an impossible mission to kill the Shogun’s heavily protected brother with a crew of only 12 assassins (plus one surprise figure).

This sleazy little Niagra Falls potboiler is one of the more intriguing 2020 releases, with Tuppence Middleton as the noir protagonist and David Cronenberg as a conspiracy podcaster. It’s not going to blow anyone’s mind, but I want to call attention to it because it’s very under the radar and I enjoyed it quite a bit. Great score.

HBO Max has an embarrassment of riches with its Criterion section, so I won’t make extensive recommendations (just throw a dart at the Criterion offerings and press play), but here are a few:

This is the one Dirty Harry movie that Eastwood directed himself and it is by far the best and most artistically ambitious in the series. It was early in his directorial career but it has his trademark dark lighting and immaculate framing. Sondra Locke is superb. This is a very dark movie and it deals with difficult themes of sexual assault and trauma. Strong content warning.

As quirky oddball indies go, this is solid. Absurdist horror-comedy about a man bent on being the only person with a jacket.

One of the best-worst movies ever made. Directed by Italian trashmaster Claudio Fragasso, written by his wife Rossella Drudi (as an anti-vegetarian parable), and starring a glorious cast of non-professional actors from the Salt Lake City area. There’s a long, loving discussion of this in my forthcoming book on good-bad movies (which I’ve recently submitted a draft of). It’s perfect for a social setting. Profoundly eccentric, very funny.